Start-up companies are often in need of staff, but too busy to post jobs. An invitation in May to present job offers to students of Computer Science revealed that at least seven Copenhagen Science City-based companies were hiring… even at zero notice.

When Copenhagen Science City was invited to the University of Copenhagen career-fair for Computer Science students, one thing was clear. Students needed to hear about the many opportunities for working in start-up companies in the innovation district.

The district is home to seven innovation environments housing some 350 start-up companies. Not one of these companies had jobs posted at the time. In an effort to uncover actual jobs to present to the students, Copenhagen Science City sent out mails to all seven environments, offering access to the highly sought after computer experts.

Jobs appeared for the right candidates

The companies were given just two weeks to respond. Yet seven start-ups entrusted the innovation district with their job offers. These included internships, student assistant jobs and full time positions, and the interest at the event was considerable.

The annual University of Copenhagen, Department of Computer Science Career Fair, is a highly exclusive affair. The richest companies in Denmark pay handsomely for a chance to hire these highly coveted graduates but competition was steep. Though the corporations offered free beer and cake, at least 30 of the 200 students chose to hear about finding and applying for start-up jobs.

Trying to hold on to international students

Apart from the Copenhagen Science City-booth, presenting the hyper-local opportunities, the two organisations International House and Work In Denmark were there to persuade international students to stay in Denmark for a job or to start their own business. University of Copenhagen trains large numbers of students from around the world. Students who might add tremendous value to Denmark by staying.

As an added service for students thinking about working in start-up companies, the Copenhagen Science City-team has developed a portal with lists of the resident companies at the seven local innovation communities. Find it here. 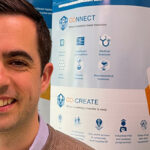