Gathering tech-intensive companies, universities and start-up communities into distinct local geographies is a global phenomenon on the rise. Amsterdam is home to one of the larger of these so-called innovation districts in Europe, so Copenhagen Science City went to visit Amsterdam Science Park and came back assured and inspired. By Jes Andersen.

Amsterdam Science Park is a 0,7 square kilometre innovation district, two and a half kilometres from the Singelgracht canal that borders the historical centre of Amsterdam. The district is home to the science department of the highly ranked University of Amsterdam, Amsterdam University College, two tech office hotels and a student start-up community. It is a hub for research, innovation and entrepreneurship within ICT, life sciences, advanced instrumentation and sustainability. This organisation was reassuring to Copenhagen Science City head of Secretariat, Kristoffer Klebak.

We are very much alike. We saw a concentrated geography, with the same types of innovation actors as we see in Copenhagen Science City. They have a university , a university college and two start-up communities for established companies. So do we. They have a student start-up community. We are building a new one. It was gratifying to see the same conclusions at work in another geography:” Kristoffer Klebak, Head of Secretariat, Copenhagen science City.

Most buildings in the park are brand new. Its masterplan is from 2003 and construction started as late as 2008. Thanks to the planned nature of the park, all institutions in it share a “Science Park” identity. They have all branded themselves as part of the park and all signage share science park colours and fonts. Since 2009 the park has even had its own railway station, named after it.

It is impressive to see what they have achieved in terms of co-branding. We have come a long way in Copenhagen Science City, but could strengthen our efforts even more with inspiration from Amsterdam Science park:” Kristoffer Klebak, Head of Secretariat, Copenhagen science City. 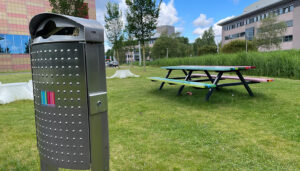 Most of the buildings in the science park are very clear in their purpose, but none more so than the student start-up community Startup Village The Village is home to 55 start-ups housed in a jumble of vibrantly coloured shipping containers. Also in the park are a café run by students and a container dedicated to venture capital and other investors.

Start-up Village was specifically inspiring. It has probably been planned as carefully as the rest of the park, but it looks spontaneous and lively. All the necessary innovation actors are visibly present and leisure activities such as the café, the table football and an outdoor punchbag gave the area a vitality that was very inspiring”: Kristoffer Klebak, Head of Secretariat, Copenhagen science City. 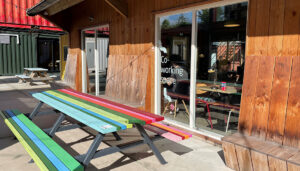 Unlike Copenhagen Science City, Amsterdam Science Park is located in an area that is dedicated to science. Nearby residential areas are on the other side of either a canal, a motorway or a railway terrain. To counteract this, the science park has completed 314 residences and 721 student units. An additional 423 residences and 617 student units are planned. 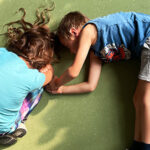 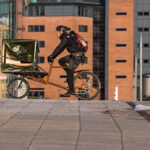 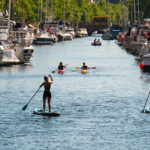